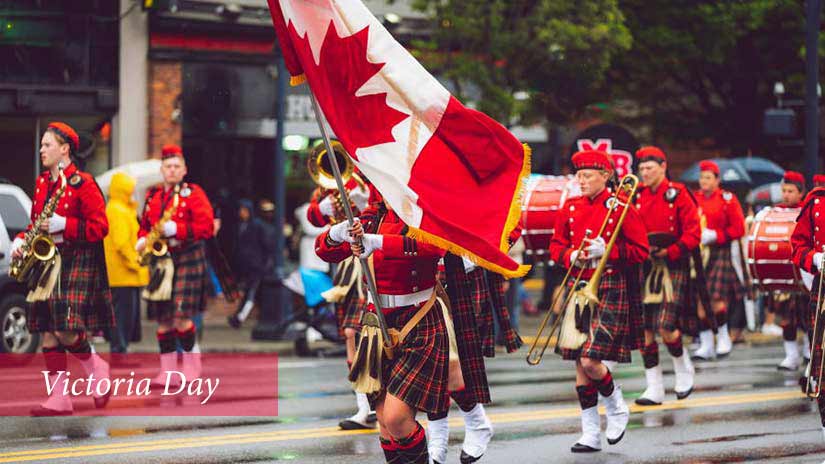 Victoria Day celebrates in honor of the birth of Queen Victoria and the summer season begins. This holiday is held on the Monday before or on May 24. Canadians refer to Victoria Day as May Two-Four Day, May Long, and May Long Weekend.

Victoria Day was first accepted in Ontario as the celebration in 1854, and some Canadians congregated in front of the government house to wish their Queen on her birthday. It was Canada's oldest state holiday, only officially declared after the Queen's death in 1901. She was the longest-reigning Queen in British history, and her sovereignty lasted until her death. In Canada, Queen Victoria is remembered as the Mother of Confederation.

A grand celebration of the Queen's birthday was also observed on May 24, 1866, in Canada West. Omemee residents did the city parade to mark the occasion, including midnight gun salute, picnics, athletic tournaments, illuminations display, and torchlight event; Such ceremonies were familiar around the province. From 1890, the day was served as a patriotic holiday.

In 1904, the same date as Empire Day was set by royal declaration throughout the British nation. The official date of the sovereignty birthday in Canada was changed through several royal statements. Both Empire Day and Victoria Day were shifted to the Monday before May 25 by order-in-council and statutory amendment. The Queen's official birthday in Canada was made to observe on this same date every year.

In 1958, Empire Day was known as Commonwealth Day and shifted to March's second Monday. In 2013, Several leading Canadian actors, writers, and politicians mailed a petition to Prime Minister Stephen Harper, petitioning that the holiday name be changed into Victoria and First Peoples Day.

Is Victoria Day a statutory holiday in Canada?

Victoria Day is a federal statutory holiday in six provinces and three territories of Canada. The provincial and territorial governments abolished federal laws in most areas of Canada. Whether or not an employee has the privilege of holiday pay usually depends on the province or territory except federal workplace like Banks.

Let us know which regions and territories have a Victoria Day holiday or not. There's a statutory holiday in British Columbia, Ontario, and Saskatchewan and not a paid public holiday in Newfoundland and Labrador. Victoria day isn't recognized in four provinces of Eastern Canada. It is not listed as a general statutory holiday in Quebec; however, national patriot day is held in this province.

What opens or closes on Victoria Day in Canada?

Municipal buildings, libraries, banks, post offices are closed across Canada, while most grocery and beer stores will be closed on Victoria Day. Public transport services may operate on a day off schedule. All shopping malls are officially closed on this day.

In some provinces, city parades are observed to mark this day. Many Canadians enjoy the fireworks display; some regions such as Toronto and Hamilton organize large-scale shows to honor or celebrate the Queen's birthday.

Victoria Day is also the unofficial ending of winter and even the start of the summer or spring season. Some Canadians use the long weekend to visit summer cabins or cottages to spend time with family and friends, hosting the barbecue in their backyard with beers.

Some even go to provincial campsites or parks for camping and enjoy other activities such as games, bonfires, musical nights and fishing, etc. Moreover, people go to amusement parks, gardens, summer resorts, and other outdoor places with their kids to enjoy the upcoming season of spring.