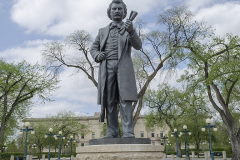 Victoria Day celebrates in honor of the birth of Queen Victoria and the summer season begins. This holiday is held on the.....

2024 NATIONAL AND PUBLIC HOLIDAYS IN MANITOBA

CalendarHolidays provides you with a list of 2023 statutory holidays in Manitoba that are distinct from national holidays observed across Canada. Canada's longitudinal center is Manitoba, which encompasses diverse landscapes ranging from the Arctic Tundra and the Hudson Bay coast in the north to dense forests, lakes, and prairie land. Manitoba is the fifth most populous region and one of the ten provinces of Canada. It's the largest, and the capital city is Winnipeg, the eighth-largest metropolitan area in Canada.

Its name originates from languages such as Cree, Ojibwe, or Assiniboine. This name was approved in Ottawa under the 1870 Manitoba Act. A large number of Manitobans belong to a Christian denomination. Manitoba's maximum economy depends on agriculture, tourism, electricity, oil, mining, and forestry. The province produces substantial amounts of sunflower seeds, dry beans, and potatoes across Canada.

These online calendars display all Manitoba holidays, festivals, and other celebrations to make your planning easier. You can use our 2023 Manitoba holiday calendar and customize it to your needs. Download it in a printable online format, including Word, Excel, PDF.