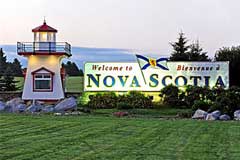 Easter Sunday is the most celebrated event across the world. It is also known as Resurrection Sunday. This Christian fest.....

CalendarHolidays provides you with a list of 2023 statutory holidays in Nova scotia that are distinct from national holidays observed across Canada. Nova Scotia is an eastern and second smallest Canadian province. Nova Scotia is the most populous region among four Atlantic provinces and the second smallest region of Canada. It's most considerable, and the capital city is Halifax, the thirteenth-largest metropolitan area in Canada. After Vancouver, Halifax is the second-largest coastal city.

Its name originated from the Royal Charter in 1621. In 1632, Sir William Alexander was granted the privilege to settle lands, such as Nova Scotia, Cape Breton Island, Prince Edward Island, New Brunswick, and the Gaspe Peninsula. Nova Scotia is enclosed by water; to the north is the Gulf of St. Lawrence; to the west by the Bay of Fundy; to the southwest by the Gulf of Maine, and the east by the Atlantic Ocean.

It is more likely that people are more willing to know about their province of Nova scotia's statutory holidays than holidays from other regions. All holidays are described with real facts about the specific festival so that you can understand how and why people celebrate a particular holiday. There are five national statutory holidays and two provincial statutory holidays in Nova scotia. Some specific holidays are only observed in Nova Scotia, like Nova Scotia Heritage Day, celebrated on the third Monday in February since 2015. It's a provincial holiday in Nova scotia, but this day is celebrated as Family Day in other Canadian provinces. The other optional holiday is Natal Day, observed on the first Monday in August, but a day off in Halifax and similar to Civic Day across Canada.

These online calendars display all Nova Scotia holidays, festivals, and other celebrations to make your planning easier. You can use our 2023 Nova scotia holiday calendar and customize it to your needs. Download it in a printable online format, including Word, Excel, PDF.